I debated whether to share this, but I couldn’t get it off my mind.

June 17th, we did a little more walkin’. It was the most we had walked in one day.  Overall, when you count the various trails we hiked, we walked a little more than six miles that day.

It was well worth it. It was a beautiful day. The sky was relatively clear and the sun was shining bright. We began our journey about 9:30 am. After a couple of quick stops we headed west towards Frozen Head State Park and Natural Area in Wartburg, TN. Upon our arrival at Frozen Head we began our hike along the Emory Gap Trail to Falls.

As I explained in my previous post, A Bunch a Walkin’, we have committed to spending sometime on our hikes this summer picking up trash we happen to see along the trail. The good thing is, this particular trail at Frozen Head State Park and Natural Area was pretty much trash free. However, I will say we did see more cigarette butts at this park than any of the others we have visited. This was also the first state park where I remember actually seeing a sign that said, “Please Do Not Litter”.

About halfway to the falls, we stopped for a short rest. As I sat on a small boulder on the side of the trail I looked around admiring the beauty that surrounded me. Suddenly, a thin, but tall living tree in front of me caught my eye. I was immediately disappointed and once again disgusted at the way in which individuals abuse nature. Carved into the tree were the letters “NR” and “EB”.

Eventually, we arrived at the falls. While there was not a huge amount of water flowing over the cliff, it was still a wonderful site to see.

After taking several pictures we sat for a few minutes taking in the sounds of nature before beginning our journey back down the trail.

As I looked around, I noticed a tree standing by itself; the next closest tree maybe 15-20 feet away. Then I saw it. The name “KURT” carved into the tree in big letters. I started looking around to see if there was more. There was. There were also carvings in the rocks on the wall that the water flows over. I probably didn’t notice them when we first arrived because I was excited that we had reached our intended destination and was enthralled by the beauty of the place.

Eventually we left Frozen Head State Park and Natural Area. Instead of heading home, we decided to stop at another nearby outdoor area. We stopped at the Obed Wild & Scenic River area, an area managed by the National Park Service. This is a very wide nature area with many different points of interest. 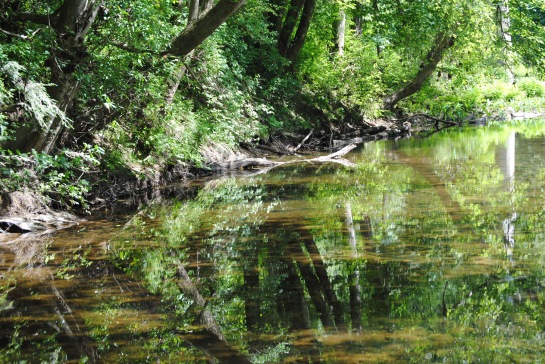 As we hiked around the area we continued to pick up trash. With the exception of the Nemo area, I am proud to say there was not much trash. I was also happy to see a sign posted in the Lilly Bluff area outlining the park rules, but, for some reason the rules did not address the proper disposal of one’s garbage. It was, however,

nice to see that the park did have several garbage cans in these areas. Unfortunately, some visitors of the Nemo area apparently do not know what a garbage can is or how to use it. Nemo, a picnic and swimming area along the river was the dirtiest of all the places we have visited. In fact, there was a huge amount of garbage less than twenty feet from one of the garbage cans. Very disappointing.

As we traveled home, I couldn’t stop thinking about the carvings in the trees and rocks as well as the trash. When I arrived home, I decided to look up the state and federal park regulations. The Rules of the Tennessee Department of Environment and Conservation, clearly state, “All garbage, papers, cans, bottles, waste materials and rubbish of any kind must be disposed of only at points or places designated for the disposal thereof, or removed from the area.”  The rules also address the “intentional or wanton destruction, defacement, or removal of any natural or cultural feature or non-renewable natural resource.” I’m sure every state has similar laws.

The U.S. Code of Federal Regulations also prohibits the improper disposal of waste and the destruction or vandalism of natural resources.

The state and federal rules are designed to protect and conserve our natural environment. When an individual or group individuals are caught violating such rules they are subject to fines and/or other legal ramifications. Unfortunately, the state and federal governments are not able to staff the various parks and recreation centers with enough employees to fully monitor every inch of the park. To do so would require the employment of thousands of works and would cost us, the tax payers, a lot more money. Personally, in my opinion the government should not have to do this. As I stated before, We the People just need to take responsibility for the environment in which we live. We must choose to learn and understand the rules, and follow them.

Hanging on for life. Not sure what’s happening to my home.