Nature vs. Nurture (I Mean Politics, Not Nurture)

If you’ve seen some of my previous posts or follow me on Instagram, you know I have had the privilege of spending several days’ experiencing the beauty of nature over the past few months. During my visits, I have taken over a thousand pictures. 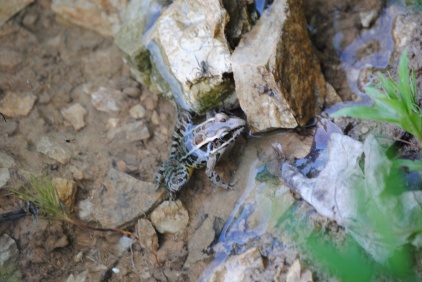 Yesterday, I had the opportunity to spend the day visiting a couple of state parks, hiking with my wife, and taking some wonderful pictures. It was a gorgeous day. The weather was perfect. The sun was shining and the temperature was at a comfortable rate. As we arose that morning our hearts and minds were ready to enjoy the beauty of nature; to admire and reflect on the plants, animals, and landscapes we would see that day.

Our first stop was Roan Mountain State Park on the border of Tennessee and North Carolina. Immediately, the beauty of the area caught our attention.

We continued our journey up the road to Carver’s Gap, an area along the Appalachian Trail. Along the way we stopped at two little pull overs to admire the beauty of the landscapes and take some pictures.

Then…the image of the gorgeous scenery that had flooded my mind vanished as I turned my head and was exposed to another person’s idiotic actions. As some of you may know, in my previous posts A Bunch of Walkin’ and A Little More Walkin’, I expressed my frustration with the trash people leave along the trails and their irresponsible decision to destroy nature by carving their names or initials into trees and rocks. This time it wasn’t the trash or the carving into trees. It was this:

Why? How is this going to help Donald Trump win the presidency? I would think most people, even Trump supporters, would be disappointed at seeing this. People visit state and national parks to explore the outdoors, to get away, relax, have fun, and enjoy the beauty that surrounds them. The last thing they want to see are political signs and messages; especially ones that deface the things their tax dollars have paid for or simple natural objects such as rocks. 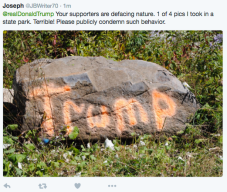 If Donald Trump is truly the person he claims to be, then he will do everything he can to not NURTURE such behavior. He will condemn it, even when it is done by individuals who support him. In fact, what he should do is encourage the individuals who did this to come forward, accept responsibility for their actions, and make amends. I thought I would let Mr. Trump know this, so I sent him a Tweet.

In the end, nature defeated politics. I had a wonderful day spending time with my beautiful wife and being surrounded by the beauty of nature. After leaving Roan Mountain State Park we decided to visit another state park and catch the sunset. The one we chose was Warriors’ Path State Park. While we didn’t spend much time there, what we did see was awesome. Here’s to hoping that eventually the sun will set on people who make choices that destroy the nature around us.

By the way. I forgot to mention. Apparently, according to another message left on the ground just off the road and next to the Trump ones, Obama is Muslim. 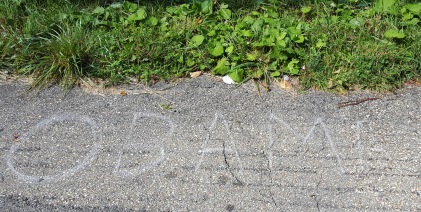 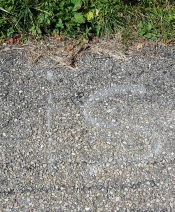 (Note: Please don’t make any assumptions about this post as to who I am or am not supporting for president. I have not officially decided.)